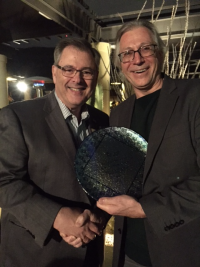 According to CLSI, "the award is presented annually to an outstanding volunteer or group of volunteers in recognition of advances in CLSI organizational directives and objectives, through unique and significant contributions."  Established in 2006, the award has been presented every year in honor of John V. Bergen, CLSI’s first full-time Executive Vice President.

"Dennis' direct contributions to all essential standards within the pre-examination areas of laboratory medicine is unequaled," said CLSI president Dr. Jack Zakowski during the award ceremony last month in Tempe, Arizona. "He has made great contributions to the field, most notably in the area of blood specimen collection. "His leadership in CLSI’s standards ensures consistent emphasis on the customer-related and patient-related aspects of blood sample processes, professional standards of behavior, and critical technical skills.  Besides that, he's a really nice guy."

Since 2002, Ernst has been involved in writing or revising almost every preanalytic document in CLSI's library. He's chaired six Document Development Committees and served as a member for five others. In 2015, he was appointed to the organization's Consensus Council, which has authority over all CLSI standards development activities.

"In 1999, I got into my rusty old pickup truck and drove from Indiana to Raleigh, North Carolina to attend an educational conference presented by CLSI, known then as NCCLS, about their newly revised venipuncture standard, H3-A4," says Ernst. "The presenters involved in the revision were so warm and welcoming, they even invited me to join them for dinner. From that moment, I knew I had to become involved with the organization, and with that standard."