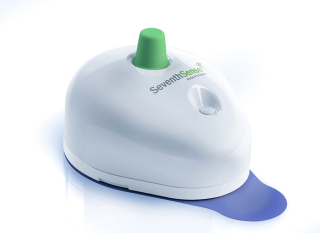 Over the years, the Center for Phlebotomy Education has been approached by many inventors trying to wow us with their better mousetrap. We don't impress easily. Recently, however, we were gobsmacked by a skin-puncture device that seems poised to revolutionize the way capillary samples are collected.

We first caught wind of Seventh Sense Biosystem's TAP® blood collection device back in 2012. Since then, the company has been diligently testing, tweaking and perfecting their technology. Last month we were invited to visit the company's offices in Medford, Massachusetts to meet with its team of innovators, see the technology and, yes, have our blood drawn.

It is truly painless.

The TAP device, which is about the diameter of a stethoscope head, is placed on the surface of the skin, usually the upper arm, after routine cleansing. A layer of hydrogel secures it to the skin. The user pushes a button that deploys a matrix of 30 solid microneedles, each as thick as a human hair, into the upper layers of the skin. Once pushed, the device applies gentle suction pulling blood from the capillaries into an interior reservoir. When filled (in 90 seconds or less), an indicator tells the user collection is complete, and the entire device, containing 100 microliters of heparinized blood, is removed from the skin and sent to the testing facility. Alternatively, the device can be handed to a healthcare professional for testing in a point-of-care device. Testing personnel extract the sample with a pipette inserted on the underside of the TAP device, and transfer the blood to a POCT device or conventional laboratory instrument for testing. 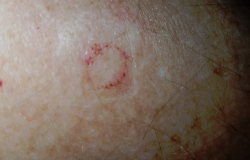 After eight years of development, TAP is ready for prime time. According to a recent press release, Seventh Sense's CEO Howard Weisman says "TAP has the potential to transform blood collection from an inconvenient, stressful, and painful experience to one people can do themselves anywhere, making health monitoring much easier for both healthcare professionals and patients." According to reports, TAP has been tested with Abbott's iSTAT and Abaxis's Piccolo POCT devices. The company suggests compatibility with central laboratory instruments is not far away, as more and more instruments are being introduced that handle microsamples of whole blood.Just days before our visit, Seventh Sense received FDA clearance for the TAP for healthcare professionals to collect hemoglobin A1C samples. That would explain the palpable electricity we felt in the air. The company is developing, and intends on commercializing once cleared by the FDA, versions that enable consumers to collect their own blood anywhere and anytime. In the short term, the company is pursuing clearance for other laboratory-based collections, including models that collect larger volumes of blood and modifications that transform samples into dry blood spots. Designs that include EDTA or separates plasma from cells within the device are also in the works.