Slapping Veins: Is it necessary? Is it professional? Is it battery? 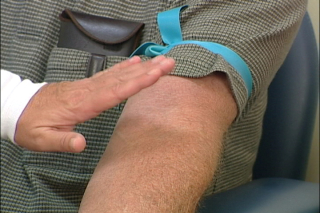 A common practice to get veins to become more prevalent is to slap the area where veins are commonly found. However, doing so raises many questions about its affect on test results and the impact it could have on patients, including complaints of battery.

To date, no study has attempted to determine if analytes are altered or not when sites are slapped prior to needle insertion. We can't be sure they are, and we can’t be sure they aren't. The evolution of the venipuncture standard (GP41) published by the Clinical and Laboratory Standards Institute (CLSI) provides some indication that the consensus of authorities is to discontinue this practice.

Before the venipuncture standard was revised in 2003, the standards agency’s 1998 version suggested sites should be "tapped sharply" when searching for veins. However, the passage was removed when the document was revised in 2003. It has remained vanquished from its pages in two subsequent revisions (2010 and 2017).

“Having been involved in the 2003 revision, I can tell you that the committee thought the practice was unprofessional, overly aggressive, and had the potential to alter test results,” says Dennis J. Ernst MT(ASCP), Executive Director of the Center for Phlebotomy Education.

Ernst is also concerned about the emotional impact of striking the patient. “It’s not out of the realm of possibility that any given patient has been abused by a parent or spouse, and that tapping or slapping his/her arm sharply could rip open emotional wounds. Patients might not understand or appreciate this technique. Nor is it out of the realm of possibility they could file a legal claim of battery. You can't be sure patients don't mind. Nor can you assume they haven't been abused. Given other more effective means to find veins exist, it’s best to take more conservative, and less risky, measures.”

Ernst agrees it is important to locate veins so that the procedure can go as smoothly and quickly as possible, and that the procedure will yield high-quality specimens that reflect the patient's actual physiology. He suggests 1) applying a warm compress to the site for 2-3 minutes to dilate the veins in the area; 2) lowering the patient's arm relative to the heart so blood fills the limb, distending the veins; and 3) asking the patient to squeeze, but not pump, the fist to bring more blood into the muscles and, hence, the veins feeding them.

Dennis Ernst blogs from his office on Lake Huron in Cheboygan, Michigan where he directs the Center for Phlebotomy Education. Highly respected and widely recognized as the leading authority on phlebotomy, Dennis has written five books, produced 17 training videos, authored hundreds of articles, participated in the development of 11 comprehensive standards for the industry, and delivered over 500 conference presentations in 11 countries. His writing style is congenial, respectful, and personable while delivering impeccably accurate and reliable information to his readers on performing, teaching and managing blood collection procedures. Besides all that, he's just a nice guy who likes to help people and companies succeed. When asked how he defines success for himself personally, "When I take my last breath, I want it to be that I saved someone from suffering because I took my first."