The newly revised venipuncture standard released by the Clinical and Laboratory Standards Institute in April, 2017 is the most comprehensive revision in the document's history. With over 140 new mandates, facilities have a lot of changes to implement. This series discusses one or more substantive changes each month. 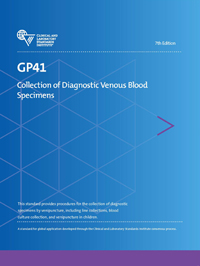 "Many phlebotomists are so organized, they want to be ready to go as soon as they greet their next patient," says Dennis J. Ernst MT(ASCP), NCPT(NCCT), who chaired the revision. "That's all well and good, but it only saves a couple seconds. What gets compromised, though, is the patient's confidence the device was not left over from the last patient, and used on them by mistake."

Ernst has first-hand experience in what can happen when phlebotomists assemble the device in advance. He recounts a patient at a facility where he worked as a medical technologist who thought the phlebotomist picked up a used tube holder assembly on her. "She didn't say anything during the draw, but by the time she got to the registration desk on her way out, it had sunk in, and she was mortified. She didn't see the needle assembled from its packaging, and was certain the needle used on her was left over from the last patient. It took a long time and a lot of explaining to convince her that's not what happened."

According to Ernst, his CLSI committee felt it was important to make sure patients see the devices that are going to be used on them assembled in their presence. "You're only going to save a couple seconds, so instead let that patient see you assemble your device from the sterile environments of their packaging. When we assemble our devices in the presence of the patient, we eradicate the potential for them to go away thinking that they might have just been drawn by a needle left over from the last patient. As long as you're preassembling devices before you get to the patients side, there will always be the potential for the patient to be fearful of the care they received."

Editor's note: Readers are urged to obtain their own copy of the standard as soon as possible and begin implementing all new provisions. The document Collection of Diagnostic Venous Blood Specimens (GP41-A7), is the standard to which all facilities will be held if a patient is injured during the procedure or suffers from the consequences of an improperly performed venipuncture.

Dennis Ernst blogs from his office on Lake Huron in Cheboygan, Michigan where he directs the Center for Phlebotomy Education. Highly respected and widely recognized as the leading authority on phlebotomy, Dennis has written five books, produced 17 training videos, authored hundreds of articles, participated in the development of 11 comprehensive standards for the industry, and delivered over 500 conference presentations in 11 countries. His writing style is congenial, respectful, and personable while delivering impeccably accurate and reliable information to his readers on performing, teaching and managing blood collection procedures. Besides all that, he's just a nice guy who likes to help people and companies succeed. When asked how he defines success for himself personally, "When I take my last breath, I want it to be that I saved someone from suffering because I took my first."