What Should We Do?: Drawing extra tubes

Question: I am the only phlebotomist in a cancer center.  With frequent transfusion patients, I will draw two large blood bank tubes, label them and set them aside in my rack. The doctor sees the patient and either orders blood, or does nothing. I am not sending, ordering, or doing anything with them until the doctor tells me what he wants. This is totally to avoid the "second stick" on patients who can be very difficult to get anything from. If there is not a transfuse order, I discard the tubes. Is it illegal to draw the two tubes?

Our response: There's nothing "illegal" about drawing extra tubes. Inappropriate perhaps, but not illegal. It would only be inappropriate if a venipuncture isn't necessary for other lab work that has already been ordered. In that case, you're not subjecting them to a procedure that isn't necessary.

Assuming a venipuncture is already required, the only issue would be whether or not it's against facility policy. One facility found drawing extra tubes on patients for lab work that wasn't ordered was costing them over $200,000 per year. They discontinued the practice after realizing only four percent of the extra tubes were being used.

Additionally, cancer patients who frequently require transfusions are already at risk for anemia. The practice of drawing extra “just in case” tubes of blood with each visit could actually cause iatrogenic anemia, which may then require the patient receive another transfusion. Transfusions are not without their potential risks, so drawing those extra tubes with the best of intentions could end up being harmful to the patient.

If you're performing a venipuncture just in case the physician places an order later, you could run into trouble should the patient be injured during the procedure (arterial nick, nerve damage, falls from passing out, etc.). The opposing attorney could successfully argue the procedure that lead to the injury was not ordered and wasn't necessary.

Panelists for this month's column include: 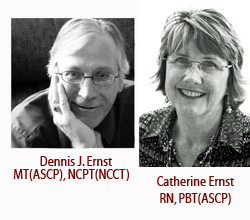 Got a challenging phlebotomy situation or work-related question? Email us your submission at [email protected] and you just might see it as a future case study. (Names and identifiers will be removed to assure anonymity.)